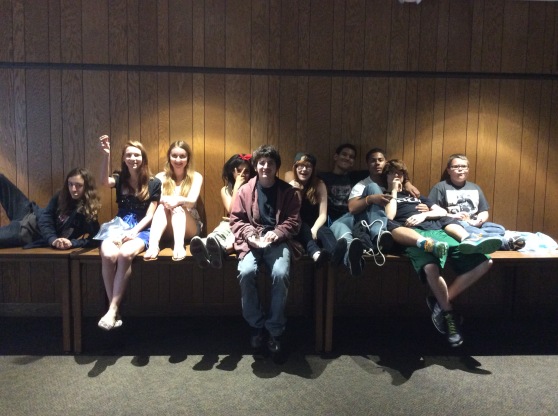 Life as a teen librarian is a fascinating/frustrating experience.

I’m not your parent, although I often know more about your interests and who you really are better than your parents.

I’m not your teacher, though I know your reading habits and what other skills & strengths you have outside of test-taking.

I’m not your sibling, though I’m often the person you come to with questions about STDs and other difficult issues you couldn’t find on Google.

I’m not your best friend, though I’m often one of the first people you come out to.

I’m not your social worker, though I know which of you have water and electricity and heat and which of you don’t.

I’m not your therapist, though I help you find books and information you need when your guardian won’t take you to a therapist. I put the suicide hotline number in your hands after I notice what you were looking at online, asking no other questions.

I know which of you suffer from emotional abuse and avoid being at home as much as possible, often skipping meals to do so and walking long miles to get to the safety of Teen Central.

I know which of you have learned to ‘play the game,’ becoming a different person depending on the group you’re in so you can better navigate the moods at home.

I suspect which of you are physically abused based on the long sweatshirts & jeans being worn in our sweltering high-humidity, 90 degree Ohio summer days.

I stand on the sidelines, wanting to help you break out of the violence and poverty that has been your life, but unable to do so when the college financial aid dance becomes too complicated and life on campus alone without the support system so many people take for granted gets too scary. Home might not be great, but at least it’s familiar.

I help when and where I can. But too often, I know you so well but am not a big enough presence in your life to help before it’s too late. I hear things through the grapevine; so-and-so’s back from college, they’re pregnant, he got shot. Social workers, parents, teachers – they’re told things. People let them know when tragedy strikes. But no one thinks to tell the teen librarian – she hears about it on news, stalks people on Facebook who neglect their privacy settings, desperately seeks information online.

Lately, colleagues ask me about Pokemon Go, if the kids are excited about Suicide Squad, if they care about the new Harry Potter book. I give these answers, but what I really want to know is what I’m supposed to do with my memories of the smart, hilarious, and sassy girl who left me a note on my desk two weeks ago just to say ‘Hey girly miss you lol’ after I haven’t seen her in months who shot her father last week.

What can I do for a former teen who is so smart and  been through so much who got shot in a botched robbery attempt, losing a lung and nearly dying in the hospital to infection? I was a wreck that month, but thankfully, he pulled through. Now he’s finding it difficult to get back to school to finish his double-major of chemistry and physics, what with his new disability and the knowledge that his shooter was allowed to walk free due to no evidence outside of his word.

How do I respond to a nineteen-year-old that I’ve known since I started who is excited to be a father but is panicking that his girlfriend might want to terminate the pregnancy?

I don’t know what to do for a teen who summons up the courage to tell her mom that she suspects she’s suffering from anxiety and depression and wants help then gets told to just get over it after laughing in her face.

I want to know how to help these kids get through more than a semester of college without the support system that I had.

I want to be as big a part of their lives as the knowledge I have about them, but I don’t know how. I know so many of these kids, give them a safe place to grow and explore and figure out who they are, and yet, nine years after starting, I still don’t know what to do about this big stuff. It hasn’t become any easier.

My life as a teen librarian is filled with gaming, the latest book-to-movie adaptation, lots of noise and tons of nerdy, awesome laughter; I know that. And I know that that’s what most people think of when they hear the phrase ‘teen librarian’. But my life is also filled with so much frustration.

I’m a teen librarian in Ohio. Come on in and join the fun!

Please feel free to use anything presented here in any way you see fit – no need to ask. If you do have questions, feel free to contact me.

Thanks for stopping by!

My thoughts are my own and do not reflect those of my employer or the library or organizations for which I work or have worked.