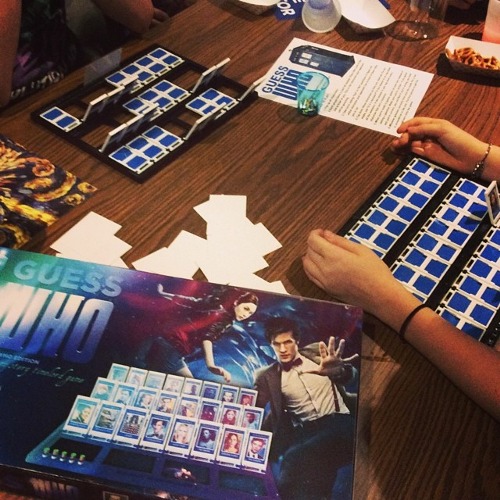 Doctor Who continues to be very popular amongst my teens, so we hosted another Who event this summer, this time just for teens (our previous program was all ages).

I found some fun videos on YouTube & put them into a playlist. My favorite was definitely a rather adorable fandom cover of Call Me Maybe. Give it a listen!

We played many games – Blink/Don’t Blink (a rather fast game of Red Light/Green Light, so we played it many times), Cyberman Says, and Toss the TARDIS. I discovered that my teens love to play any theme-specific game of hot potato, so of course we just tossed the TARDIS around to the theme song.

From our previous event, we again used the Gallifreyan translator but this time to make bottlecap keychains, and also made duct tape bow ties as well as Van Gogh coloring sheets for those who just want to hang out and watch the videos.

The biggest hit of the event was, by far, Guess Who. I would say that most of my teens had never played, with a surprising number that never even heard of it.They played this continuously all night, with many arguments ensuing (is River a villain or a hero?). They came up with the rule that Captain Jack is human, but the Face of Boe is not, being rather nice to those new fans who are still catching up.

I threw this together after seeing it on Tumblr, and the graphics & instructions for making your own is here at Karen Kavett’s blog.

The big craft of the evening was SPACE JARS. I followed the directions from Martha Stewart to make snow globes, only we tipped the jars right-side-up, and added a dangling TARDIS.

How to do it!
TARDIS:
1. Create rectangles from blue polymer clay. I was able to get eight out of each pack.
2. Press jump ring into top.
3. Bake according to instructions (I did steps 1-3 prior to event)
4. Using markers, add doors & windows.

JAR:
1. Hot glue fishing line to jar lid. (also done prior to event)
2. Tie fishing line to jump ring on top of the TARDIS.
3. Add glitter & confetti.
4. Fill with water.
5. Add a squirt of glycerin, which helps slow glitter’s descent to bottom. (A bonus, but not required.)
6. Tighten jar lid, gluing to seal if desired. (We did not do this part; the jars were fine.)
7. Decorate top of jar as desired with quotes, pictures, etc.
8. Shake up the jar to the theme music!

Be sure to ask if you have any questions! 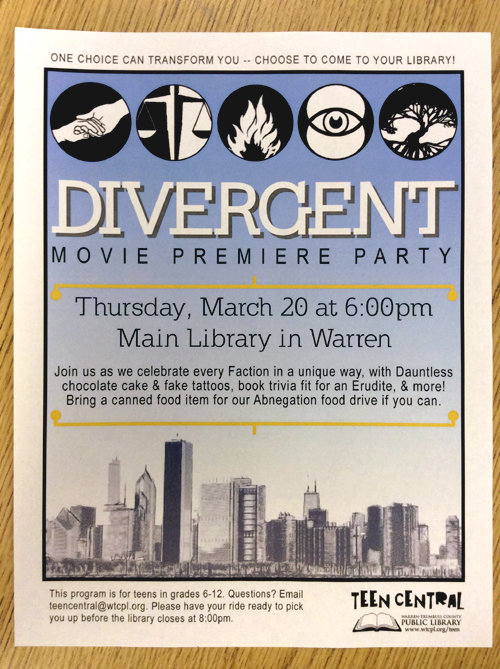 Here’s a confession for you: I like Tris better than Katniss (That doesn’t mean that I think Divergent is better than Hunger Games, because well, it’s not). And I’m very, very happy that the actor playing Four is only two years younger than me. I really liked Four in Divergent, and I’m quite delighted that I can find him attractive without feeling like a dirty old woman. I guess that’s the price you pay for reading so much teen literature!

But anyways! Are you throwing a party for the premiere of the Divergent film? I am!

When I set about planning this party, I knew that despite the setting of the first novel (and presumably, first movie) I didn’t want this to just be a Dauntless shindig – that kind of goes against the whole point of the books. So I wanted to have something that celebrated each faction, and this is what we have planned:

We’ll also create t-shirts (I order them in bulk from Adair so we have them for various programs) using stencils of the factions & the Crayola Airbrush – have you used this yet? It is AMAZING! I don’t understand how it works, but wow. Pretty fantastic, and a definite worthwhile investment for programming. I’m always looking for items I know I’ll use for multiple programs, & this is definitely one of them. We have two now, and I know we’ll get our money’s worth in no time.

We’ll probably also make book charms, because they’re so cheap, easy, & fun for the fans. To make them: print out 1″ images, cut out, glue onto folded paper for the “cover”, then staple 4-5 pages inside. Punch a small hole & loop a jump ring through – voila! Super easy & cheap craft your teens will spend HOURS making. It’s a great “merit badge” for book clubs, too.

So, what do you have planned for your Divergent party?

Why finally? Because my teens have into this series for far longer than they’ve been into Hunger Games. They are so, so excited! I know a lot of you are probably working on movie premiere parties, as I am, so I thought I’d share what I’m planning now!

In case you hadn’t heard yet, the movie was moved to a Wednesday release, so now it’s premiering on August 21st. I always have my programs before the movie to lessen the chance of spoilers, so if you have the same concerns, take action now!

So that’s what we’re planning! What are you doing at your library? 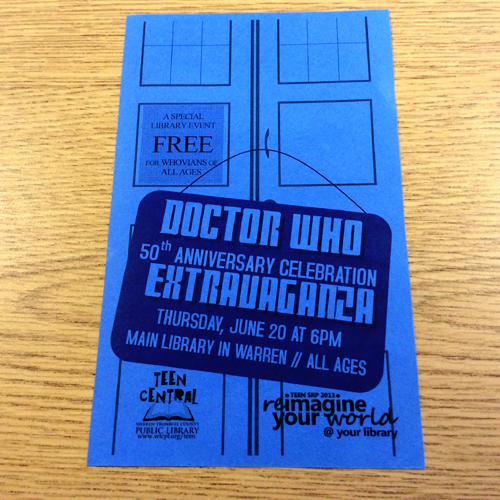 I mentioned awhile ago now that Doctor Who was quite popular among the teens of our library, so when we set about creating our generic “ReImagine Your World @ your library” teen summer reading program, I *knew* I was going to host a Doctor Who event for the 50th.

I just never imagined it would be such a hit.

First & foremost, I am incredibly proud of myself for that flyer. Although I do think I have an eye for graphic design, I have no formal training, and am usually stuck with whatever images I can find through the various royalty-free databases. But that flyer up there, I created the entire thing using shapes in Publisher. Obviously, I printed it on blue paper, but it just worked so well. Everyone IMMEDIATELY knew what it was, & so the marketing worked perfectly.

I decided to host this for all ages – and they came. We had well over 100 people, which the most I’ve ever had at an event. The most amazing thing, though, was that the Facebook event was shared all over the place. I had calls from the next county over, asking about the program. And just… wow. It was so much fun!

So, what did we do? Well, to begin, I turned the entrance to our meeting room into the TARDIS. I painted a bunch of cardboard blue, hot glued it together to match the doorway (there were plenty of overlaps), use black duct tape for the lines, & then duct taped the whole thing to the door frame. It was a lot of trial & error, but definitely worth it. Everyone had a great time entering the doors only to discover that yes, it’s “bigger on the inside.” Plenty of photos were taken, too.

Food was simple – I made sugar cookie “fish fingers” and small cups of vanilla pudding “custard”!

As for activities…
– Van Gogh coloring sheets for the little ones
– Duct tape bowties, which I hear are cool.
– Vote for your favorite Doctor – very close between 10 & 11, with 4 right behind.
– Trivia through space & time
– “Don’t blink!” staring contest – we gave away a Weeping Angel Barbie, and everyone who participated received a “don’t blink” button
– Sonic screwdriver pens made with polymer clay
– Gallifreyan name translator using this nifty widget – we printed on blue paper!
– TARDIS and Dalek paper toys
– Doctor Who at the Proms from 2008 aired throughout the program

Will the Doctor be visiting your library in the future?

Have Nerdfighters invaded your library? They’ve certainly invaded mine! So for our kick-off party this summer, I hosted our own Nerdfighter Gathering, “An Evening of Awesome.”

What’d we do? So glad you asked! 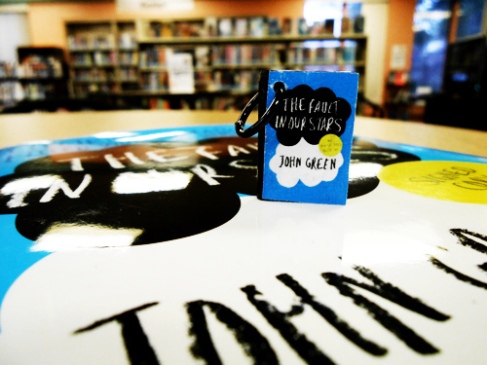 I used Happy from Fairy Tail because it’s all about keeping them happy – get it? Anyways, I presented this at the OLC Northeast Chapter Conference today – hello! Feel free to use any of the information here for anything you might need it for, or to pass it on.

Resources
» Saturday Night Live “J Pop America Fun Time Now” Skit, which really ought to be required viewing for those us who love, but occasionally get tired of, the obsessed otaku in our lives.
» Slides in PDF form
» Hand out PDF

One thing I ought to mention: these are ideas. While I’ve done my fair share of these, I can’t say I’ve done them all. But please don’t hesitate to ask about anything, though!

If you have any questions or comments or just want to talk, please feel free to contact me, either here or through my work email (amazings AT wtcpl DOT org). It was awesome to see everyone, & I hope we’ll talk again soon!

You might have noticed that owls are very popular right now! Owls fit perfectly with the summer reading theme this year, so I knew I wanted to do some sort of owl craft. I looked around a bit, but a lot of things were just more complicated than what I really wanted. So I whipped these little guys up, & my teens had a blast putting them together!

Here’s what you need to put these adorable little guys together:

Glue all the bits together, stamp the eyes, & decide which level of sleepiness you’d like the owl! The teens made these into magnets (using the self-adhesive ones) for their lockers or glued them to pre-cut bookmarks, or just glued them onto wherever they wanted them. Some of the teens even glued some together so they were looking at each other. So cute!